While we can all buy whatever Tarot deck we are attracted to, when it comes to your very first deck, buying one which is fancy and has little traditional symbolism can cause problems. One of the best Tarot decks for a new Tarot student to buy is the Rider Waite Smith deck. The main two reasons for this are that:

1: It is very written about, so details of what the imagery of the cards means can be found within books like mine – Understanding Tarot and many, many others, as well as the internet on thousands of sites for free. Resources for the deck are easy to come by and often fit whatever your pocket allows.

2: The card illustrations are packed with symbolic references which your own mind will already understand to some degree. Each card tells a story and has a picture that portrays something to the reader.

The Rider Waite Smith deck is not one of the easiest, even if it is promoted as a good starter deck, it is offered up as such due to its illustrations. You can also get a lot of Rider'esk decks. These are decks drawn by different artists yet feature each card’s main structure image-wise. This leaves all or most of the same symbolism in place.

There are many beautiful decks to choose from, so many it can be overwhelming. When I started there was only one deck sitting on the shop shelf, thankfully, as I am awful at having to make choices between pretty things.

There is a divide between the Tarot do Marseilles and the Rider Waite Smith Decks, so choose which one you want. Of course, there are many other pathways to take, yet they are the two major ones. The Marseilles having Pips cards (plain) as the Minor Arcana cards can leave a lot of students stuck, yet you can read them with the traditional RWS meanings. Yet to study Marseilles in themselves you will find them having slightly different meanings. For me, it is the RWS road that is better for those new to Tarot, due as mentioned, to the imagery.

Here are some differences between the Marseilles and RWS decks 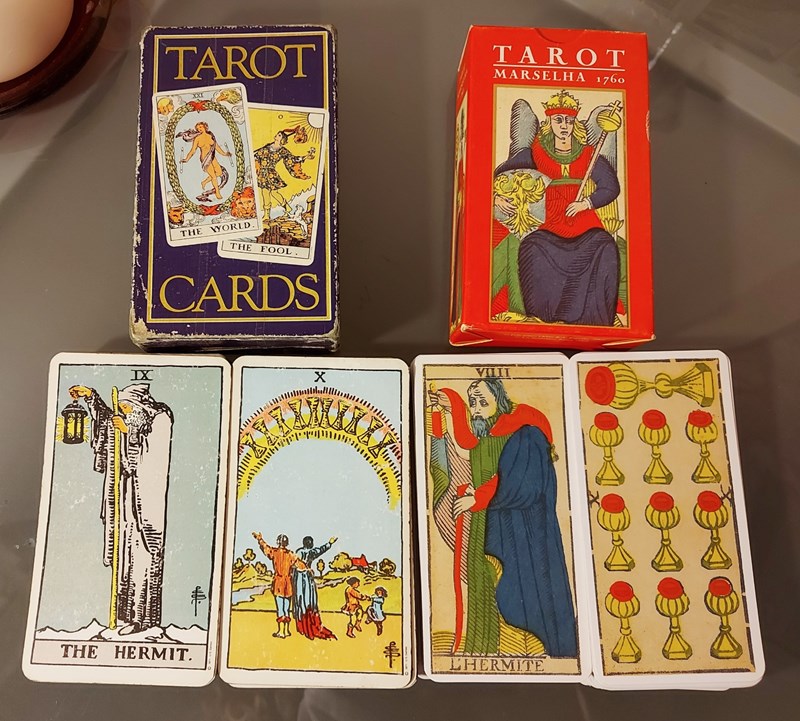 Some popular decks are not easy to read, they have imagery that is not linked to the meaning of the card. For those totally new to Tarot, this can offer a lot of confusion and are decks, which unless 100% drawn to might be better left for when you have more experience and can transfer your knowledge from deck to deck.

I have chosen the Seven of Wands from the Rider Waite Smith and other similar style decks, so you can compare the Seven of Wands in non-traditional decks. Within the Rider Waite Smith deck, and those which follow in the same vein you can see the struggle of the man, the standing over his opponents and their views and opinions, his anxiety and making sure he is not toppled from his position or left unheard. In the other cards, it is not so certain what they are about. If at the very, very start you’re drawn to a deck that is not traditional, go for it, yet if you’re finding it hard, get back to basics before you spread your wings.

RWS and Similar Based Tarot Decks - Seven of Wands Here is the traditional Rider Waite Smith, the Quick and Easy deck which can be found on Amazon etc. There are also independent developers, who in areas where the licence has been lifted have become very clever at making their own versions of the Rider Waite by adding meanings and keywords.

which also comes in pink and gold. Aimed at teenagers and students young at heart alike. While there are no rules to what deck you use, it is all down to personal taste, if what you are drawn to causes more confusion in those very early days, go to what is prescribed by many, many experienced teachers ~ the Rider Waite Smith and its variations of artists designs.