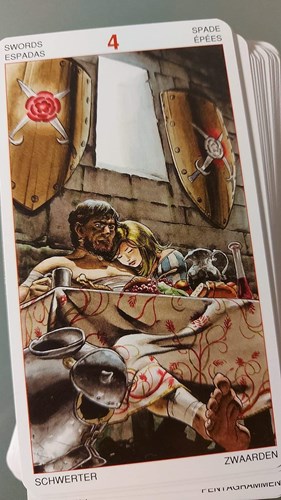 Calling a Truce and the Four of Swords

I was looking through this deck at the Four of Swords, and as I used my Golden Dawn deck the element of this card’s need for a truce came to mind.

In a lot of the Rider Waite Smith decks and clones, this card shows a man appearing dead, sleeping on top of a tomb, while that is filled with millions of tiny bits so symbolism within this card I have taken today, that differs.

The withdrawal from others, society to heal, sleep on things and get some energy back is not as predominant as the white flag being waved with the enemy. This card at first glance may show a man and woman relaxing, yet above both are their different shields with different crests, so two sides, two opponents.

Shoes are discarded, bandages applied, and a feast has been eaten as they sit to break bread in a time-out from fighting.

If you’re fighting with another, yourself, a group of people, an organisation etc while the issues may be pressing, and each side is not backing down this card can show us that it is time to be nice, offer a warm hand forward, kind suggestions and even agreeing to disagree. This truce may be temporary with this card, yet in those moments of surrender where blame is left outside the door, we can move even the most awful of situations forwards.