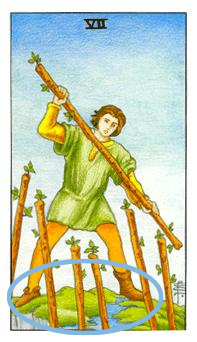 The Seven of Wands. His two odd shoes.

Have you ever noticed with the Seven of Wands that the man standing on top of the cliff is wearing odd shoes?

Why do you feel he is doing this? what reasons could lead to such a fashion blunder?

He stands, defending his position high on a clifftop. Below him are six other wands battling him, & here he stands putting up a fight. Wands are full of fire, energy & creative passion, & he is trying to get his view seen, heard, or understood as he does not wish to be toppled. He has a view that others may not be able to see & is not going to stand down.

But why is he wearing odd shoes?

Quite simply, with this being a fire element card, he has to rush to defend his position, explain his wishes, wants, opinions in a hurry. This has not been a predicted or expected attack on his position, he has had to hastily grab his wand & start battling with the competition to his position at a moment's notice. In that he may not have a firm grounding, being caught off guard those odd shoes show rush, not enough time to plan. yet being above the others he is in a better position to succeed, for the most part, than they are.

Email Guidance for your problems big and small