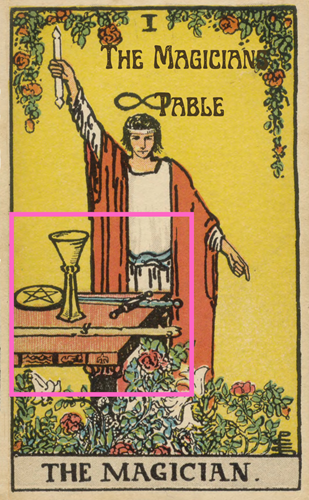 The Magician is a card which focuses on creation, on action and becoming.

Looking at his desk alone, we can see all the symbols of the Minor Arcana. The Wand for Fire, the Pentacle for Earth, the Cup for Water, and the Sword for Air. Placed on his table they not only show us his command of the elements and of life, but that he is using what is available to him. He will not go off half-cocked, nor, in most instances, prone to waiting and idling, so he uses what he has at hand. If he needs something else, he will create it, yet as with all things he needs the raw ingredients to do so, even if that mean a side venture to bring things into being. He does not cut corners!

His wooden table shows us he is grounded in reality and working from a realistic base.  Carved on the front of the table are three small images. The mountains represent reality, the waves show emotions, yet in the original image drawn these waves could be a lion and his fortitude and determination, and the bird inspiration. They show is his intellect which is balanced with his mind and emotions as he soars above problems to solve them.