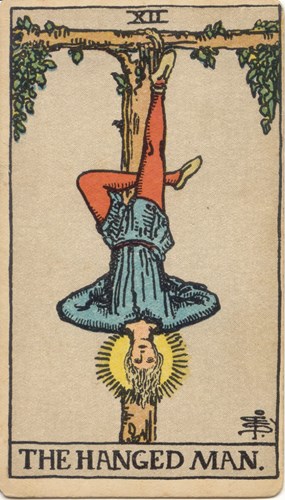 The Hanged Man and his Tau Cross

The Hanged Man is one of the iconic figures of the Major Arcana, strangely hanging upside down in an odd position.

He hangs from a tree, which forms a Tau Cross.

A Tau Cross is a symbol, at heart, of faith.

It stems from the Greek letter T symbolic of life and resurrection, and within the Hebrew alphabet, Tau is the last letter meaning truth. There are many more meanings attached to the Tau Cross throughout history, and all are based on a belief in growth through deep personal honesty. An understanding of the self, based on letting go, or going within, a journey towards what matters to be reborn in truth.

Our hanged man is only ever loosely tied to the tree, he can leave any time he wishes. Yet, he has freely chosen to invert his body, mind and his emotions on a Tau Cross. This links in with the sacrifice element of this card, the need to go within and find a new version of himself and of life. This can help him reboot, change or renew who he is and what he does in life.

He is not attached to a tree to ground energies or to heal, or to gain protection from elements, as this card is not about such things. It brings him into focus on who he is and what he is aiming for by sacrificing one view of the world for another. Faith is needed as he trusts that the process will serve him well.

In short, he is there to think, as this is a very mental card, and he has chosen the right tool for the job with the Tau as it supports his sacrifice as he searches for a deeper truth or understanding.