Skip to Main Content
Home > Blog > The Fool, His Wand and His Bag 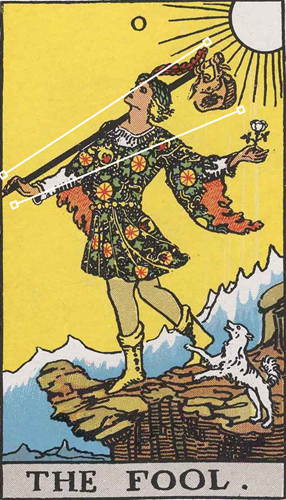 The Fool, His Wand and His Bag

While The Fool has many items to list in its symbolism, as he stands poised on his journey over the cliff edge that he is not even looking at, instead he gazes at the sunny sky, he holds a black wand and a bag over his right shoulder.

In some versions of the Rider Waite Smith deck, the wand has the white tip lost under the border taking away from the student what it is, leaving it often mistaken for a stick. It is black, which shows that it holds all his potential, which he emotionally supports with his right shoulder, the side of feeling. Anything is possible for The Fool, he is not an intellectual, so for him his potential, even if he is not aware of what that actually is, will hold strong feelings towards the exploration of what could be. As a wand, like The Magicians, it shows that The Fool has power, latent, unknown maybe - but present.

At the top of the wand, he has a leather bag, with an eagle’s head in profile upon it. The eagle symbolises the ascending spirit. His bag sits right under the sun, which fires his imagination, burning him from within to move & gravitate towards a new life.

Together they drive The Fool onwards, he does not shoulder burdens but optimism, movement, chance, and enthusiasm. He knows he can create, even if he is not tempered, as he may fall and crash as easily as he may step onto a safe pathway. Yet it is the experience he wishes, the outcome for The Fool is not as important as the itch he has to scratch.