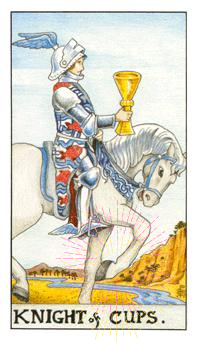 The Knight of Cups & the Horse's Foot

The Knight of Cups is an intrepid, & romantic soul. He seeks love, follows attractions & desires intimacy. He is one who is in love with love, but not too eager to be hurt.

Some of this is echoed by his horse’s foot raised, it is impatient, held in mid-air of the ground, yet also not moving as both the horse & the Knight are coming to a stop at the end of a small stream.

The stream is water, water is emotion. This is not an ocean or a river but a narrow shallow stream, which is what this Knight's emotions are – shallow & not that deep, & his emotional range does not really leave that of his romanticised, idealised mindset.

He stands poised, not willing to go through that stream, he would not want to get his feet wet with real icky emotions, as he would rather fantasise about how good things could be. To get into real feelings could burst his bubble, which with this Knight would leave his ego brutally wounded, his armour dented. He wants to feel, he really does, but reality – not so much. He wishes the version of things which he has within his head, so come take the cup & his invitation yet as those waters are walked though, & stirred up, even with a tiny splash – he could bolt, hurt & feeling that you have let him down, or that he is not worthy.