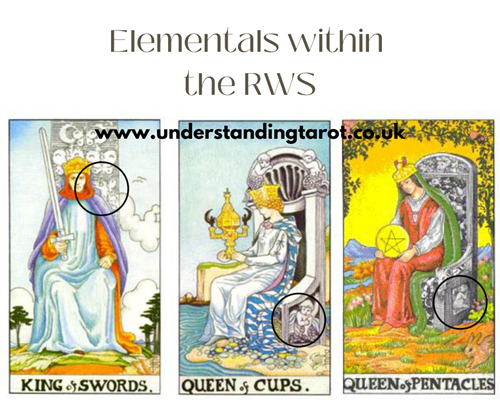 Hidden with three of the Rider Waite Smith tarot deck are elementals, fairies or nature spirits.

One is so hidden that he just appears as a few lines which are not that distinguishable. This one is to be found on the throne of the King of Swords.

This elemental is an Air Sprite, which stands on his left shoulder. Unlike the other Sword family, no wind blows to show us his mood or arrival. All is calm. The air element on his shoulder shows that this king is the storm, he is the air. He stands at the King’s ear, delivering facts, intellect & logic, flying in on air currents to those who can master their energy. This king does not deal in opinions, just his own view of the world & his own sense of justice, which can be very fair to those about him & this Elemental delivers messages which are set in stone for this King.

Within the Queen of Cups card, at the side of her throne, we have a Water Nymph/Spirit, an Undine. While they are also on the top of her throne the one at the base holds a fish, like the Page of Cups. Undines are small, like cherubs, symbolising her emotional goodness & a simpler purer love. They show her emotional side as they embody the element of water. The fish links to the subconscious, the psychic, imaginative world symbolising the lens through which this Queen can view the world. Like the Queen of Pentacles, this element is under her, so her foundation.

The last of the three is on the side of the Queen of Pentacles throne. Here we see a fairy, an earth spirit/elemental, which is attracted to & governs nature. This shows us this queen's link to her environment, her grounded, down to earth nature & her love of the physical side of life which she is in tune with. It is also a very healing energy as earth elements are said to protect the earth & create a bridge from the physical to the spiritual.

I don't know why Pamela Coleman Smith added these, she reportedly had free reign over the Minor Arcana & a mass of her own esoteric knowledge, & elementals seem a long way from the deeper subjects also included in the deck, but a lovely playful element, even if some seem to have gotten lost in the redrawing of some versions of the deck.